Home » About Us » Your Fire Team » Administration 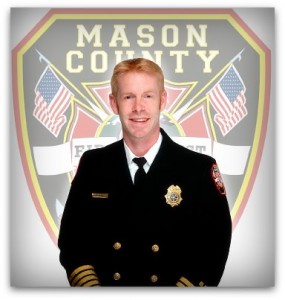 Fire Chief Beau Bakken has served the citizens of North Mason for 25 years. Raised in Bremerton, Beau began at the age of 19 with Mason County Fire District 2, in the Volunteer Resident Firefighter Training Program. Beau attended paramedic school in Tacoma and was hired by the Fire District in 1999 as a Firefighter/Paramedic. Since that time, he has moved through the ranks, obtaining the rank of both Lieutenant and Captain. He was appointed as the District’s Fire Chief in 2007. He and his Team worked to open and staff the Collins Lake Fire Station full time (2009), merge the Tri-Lakes region into the Fire District (2011), reduce the Fire District’s protection Class Rating to a 5 (2013) and passed a voter approved bond to build a new headquarters Fire Station (2019). In 2014, Beau led the effort to combine the resources of Mason County Fire Districts 2 and 8, helping to form the North Mason Regional Fire Authority. He and his staff have also worked to bring over 2 million dollars in grant funding to the Authority. He has previously served as the MACECOM 911 Governing Board Chair and currently serves as President for the Mason County Fire Chief’s Association. Beau attributes these accomplishments to outstanding staff and supervisors who have worked tirelessly to become a high performing team.

In the community Beau has served as the President of the North Mason Rotary Club, serves as the vice-chair for the St Michael Medical Center Board of Directors, chairs the St Michael Medical Center Foundation and volunteers in numerous community events. In 2017 Beau helped to formulate the Mason County Opioid Stakeholders Group which has brought together over 70 agencies to address the opioid crisis in Mason County. He has earned an Associate’s degree from Bellevue College, a Bachelor of Science degree in Fire Service Administration from Eastern Oregon University and a Master of Arts degree in Public Administration from the University of Washington. He also completed the four year Executive Fire Officer program from the National Fire Academy in Emmitsburg, Maryland. In his off hours Beau teaches Fire Protection Management at Eastern Oregon University and fly fishes across the western United States. Beau, his wife Brittney, their daughter Ensley (born 2012) and son Rowan (born 2014) are proud residents in the Twanoh Falls neighborhood. 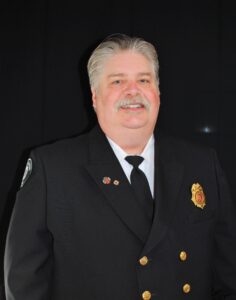 Scott Cooper is the Assistant Fire Chief of Operations for North Mason Regional Fire Authority. He holds degrees in Fire Command Administration from Olympic College in Bremerton, a Fire Service Administration Baccalaureate of Science degree from Eastern Oregon University, as well as numerous Federal, State and local certifications. He has attended National Fire Academy classes in Emmitsburg Maryland in Command and Control of Incident Operations, Incident Management and the Executive Leadership series. He serves on the Mason County Fire Chief’s County Wide Incident Management Committee, Fire Investigation and Training Officer’s Committee and is an active member of the Washington State Fire Chief’s Association.

Assistant Chief Cooper began his fire service career with the SUBASE Bangor Fire Department in 1987. While there, he worked through the ranks of firefighter, driver, Captain and Battalion Chief. In 1998, he was promoted to Assistant Chief of Operations. Scott made his move to Mason County Fire District  2 as a Shift Captain in July of 2001, initially hired as the Special Operations Captain. He has also served as the department’s Emergency Medical Services Captain and the Training Captain. In 2010, he was offered and accepted the position of Assistant Chief of Operations for Mason County Fire District 2 which would become North Mason Regional Fire Authority. Assistant Chief Cooper lives in the Lynch Cove neighborhood. He is actively involved in many community projects within the communities he serves. 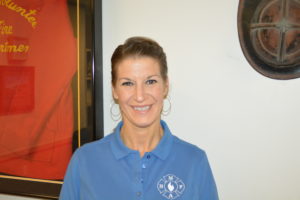 Executive Assistant Angie McCormick joined the North Mason Regional Fire Authority in October 2016. Originally hired as an Administrative Assistant, her hard work and dedication to the Fire Authority earned her the position of Executive Assistant of Finance, Human Resources and Records. Her administrative career spans nearly two decades, including 14 years working in Human Resources for the Navy Exchange at Naval Base Kitsap Bangor. A longtime Allyn resident, Angie enjoys being able to work closer to home, so she can spend time with her family. 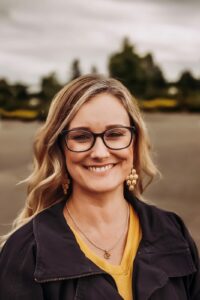 Katie Musgrave serves as the NMRFA’s Executive Assistant for Programs and Policy. Katie e is a values-based leader with 21 years of experience in business administration, resource development, state and federal contract procurement, and expert grant writing and copywriting. She has a proven track record of surpassing organization goals, campaign management, and brand management. Katie is passionate about contributing to a mission that significantly impacts the lives of community members.

Katie launched her career managing and contracting resources to combat wildland fires with the US Forest Service. After a decade, Katie shifted her career path to retail banking to work in her local community and help others achieve their financial goals. During her time with Kitsap Credit Union, she gained experience in financial education, business development, and community leadership.

Katie’s passion for her community and leadership led her to the Boys & Girls Clubs of South Puget Sound six years ago. As the Director of Corporate & Foundation Giving, she contributes to a team of 5 to fundraise $3.4 mil annually. In 2019, she successfully managed a $2.5 million dollar capital campaign to relocate and renovate the North Mason Teen Center in Belfair. She is continuously grateful for the opportunity to connect with her community. Her fundraising approach focused on authentic connections with supporters and community partners.

Community Outreach Coordinator Tavia Henry was raised in Gig Harbor, Washington. She and her husband settled down into their home on the Key Peninsula in 2015. Following high school, Tavia earned her EMT certification through Bates Technical College and began working at Rural Metro/AMR in Tacoma. After her very first shift as an EMT, she knew she wanted to attend Paramedic School and work as a paramedic. During Paramedic School at Tacoma Community College, she was lucky enough to do her ride time with North Mason Regional Fire Authority. While riding as a medic student and falling in love with the North Mason community and the fire service, Tavia began the process of testing to become a firefighter. She spent just shy of five years with Tacoma Fire, before joining the Fire Authority in September 2022. When not working, Tavia enjoys spending time with her husband and three young kids, camping and traveling. Her hobbies include gardening and collecting animals on her family’s small farm. 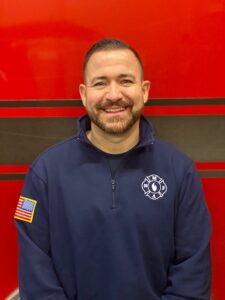 Emergency Prevention Specialist Abe Gardner was born and raised in Shelton, WA, graduating from Shelton High School in 2000. He obtained a Bachelor of Arts degree from The Evergreen State College in 2018 and is a Washington State Certified Peer Counselor. He was a Program Coordinator at Mason County Public Health for 5 years, helping to develop, coordinate and implement the following programs- Mason County overdose prevention and Narcan distribution program, Substance Use Mobile Outreach Program, Law Enforcement Assisted Diversion (LEAD) Program, Mason County Jail MAT/Re-entry program and the Behavioral Health Navigator Program for the Mason County Sheriff’s Office and Shelton Police Department. During his time with Public Health, Abe had the opportunity to partner with the Fire Authority on several projects and occasions and was always impressed by the working environment and commitment to the local community. He officially joined the Fire Authority in February 2022. Abe is passionate about helping and advocating for others and felt that the Emergency Prevention Specialist position would provide him with the opportunity to make a positive impact, while proactively engaging with the North Mason community through some incredible programs! He has been married to his wife Lisa for 11 years. They have an 8-year-old daughter, Annabelle, a 3-month-old son, Donald and a 3-year-old German shorthaired pointer, Ronan. In his spare time, Abe enjoys fishing, golfing and bowling.